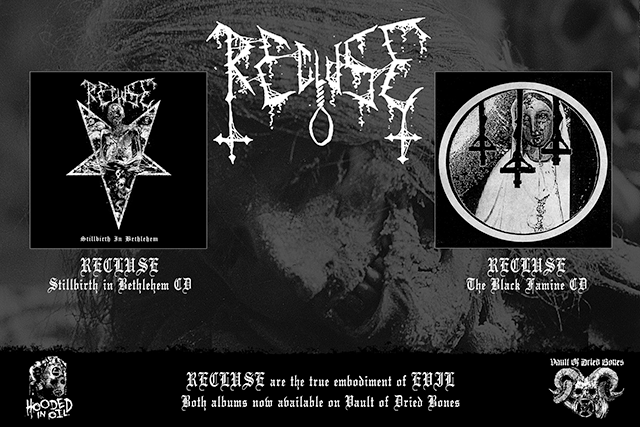 Both albums now available on Vault Of Dried Bones.

RECLUSE – STILLBIRTH IN BETHLEHEM CD
Possessed and murderous black metal. Wlad Drakksteim of Vlad Tepes vomits forth all vocals throughout the entire album. Repellant and violent.
RECLUSE are the true embodiment of EVIL.

“Recluse – one who prefers the company of themselves, seldom bothering to enter the murky world of strangers. Looking at the song titles, it’s probably for the best. Not content with being un-PC and straight to the point, Recluse brings black metal back to the halycon days of the early 90’s, weaving disgusting concepts into a tapestry of pure hatred and vitriol. This is how it was always supposed to be. If the blatant attack on Jesus isn’t suggestive enough from the album title, Recluse is joined on this record by Wlad (he of Vlad Tepes and LLN fame), who has secured a place as the permanent vocalist of Recluse. It’s not every day one of the most famous musicians in the extreme underworld of metal handpicks a band the other side of the world to fill his resume – but Recluse isn’t just any band.” – EmptinessCycle

RECLUSE – THE BLACK FAMINE CD
Vault of Dried Bones offers the ultimate edition of The Black Famine compilation. In addition to the Recluse demo, the Frozen Blood demo and the new track Ropes, this release now includes two unreleased tracks – an intro and a cover of Vlad Tepes ‘In Holocaust to the Natural Darkness’.
Previously containing a folded insert, the CD is now presented with a twelve page booklet. The compilation features most of the artwork from the CDr version seen on the Hooded in Oil release as well as expanded artwork and lyrics.

CANADIAN PREORDERS RECEIVE MAGGOTS INSIDE THEIR COPIES OF STILLBIRTH IN BETHLEHEM.