Posted on December 2, 2015 by Vault of Dried Bones 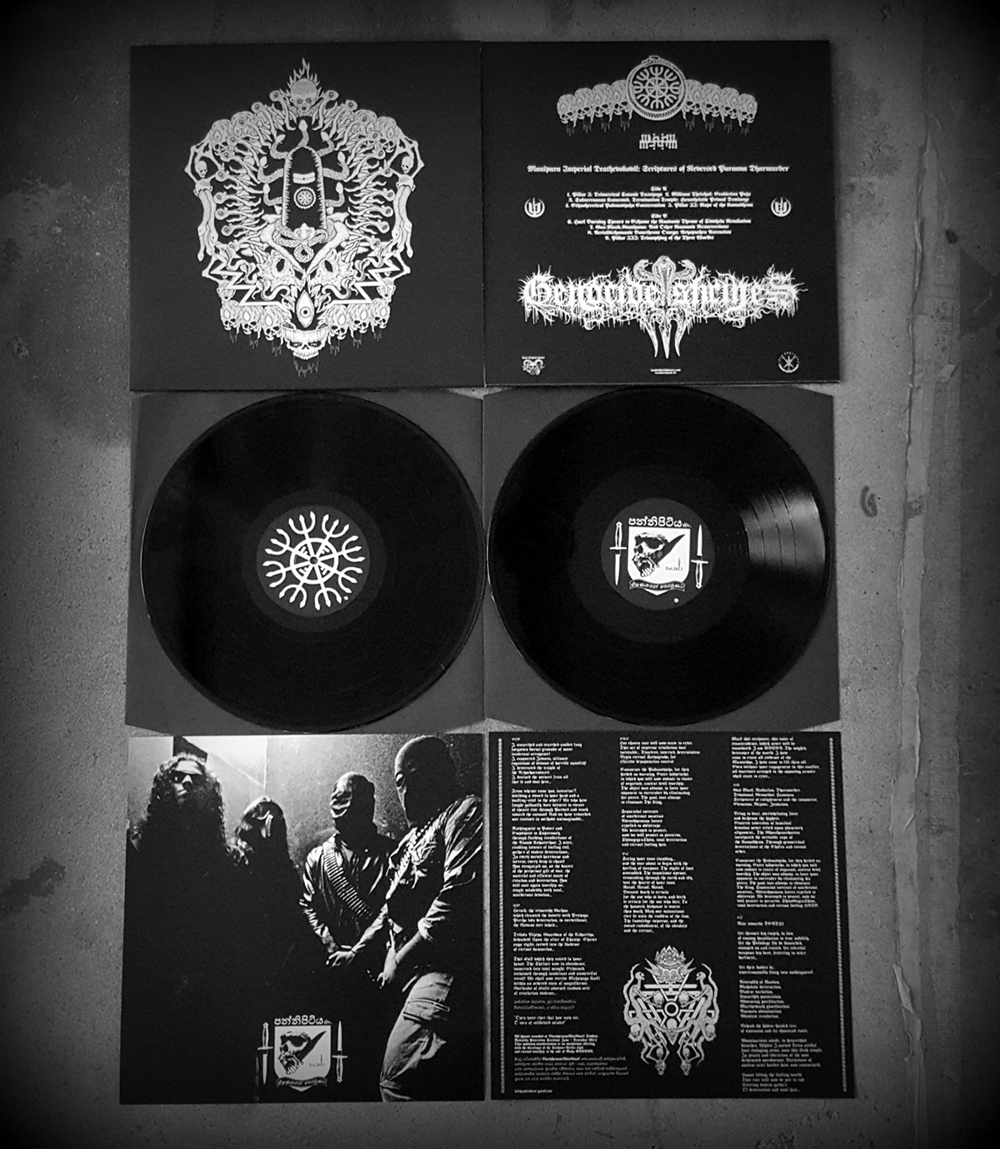 “WE HAVE DESECRATED YOUR FAITHS ONCE AGAIN. THERE WILL BE NO GREY AREAS. THE SHRINES HAVE RESURRECTED THE ULTIMATE MARANADHIPATHI TO STRIVE TOWARDS THE ABOMINATION OF THE HIGHEST OF ALL MONARCHS AND THE TERMINATION OF THE MANUSHYA RACE. GENOCIDE SHRINES IS ANTI-DHARMIC AND ANTI-COLONIAL. WE WILL HURL BURNING SPEARS AS WE ERASE YOUR DHARMA THROUGH EXHUMING THE BREATH OF PURANNA FUCKING DEATH. OPEN FIRE AND EXIT WOUNDS, THE GOAL WAS ALWAYS TO ELIMINATE THE KING”
GENOCIDE SHRINES

Vault Of Dried Bones and Iron Bonehead Productions inaugurate their first LP co-release offering with Manipura Imperial Deathevokovil: Scriptures of Reversed Puraana Dharmurder, the initiatory full-length album from Sri Lankan terrorists Genocide Shrines. The bone-dust has settled from 2012’s Devanation Monumentemples EP and the slit throats are still hemorrhaging from the Mahabharat Terror Attack split with countrymen Manifestor, but the anti-Dharmic death call has been issued once again for there are still skulls to be crushed!

A line has been drawn in the sand. Choose your allegiance carefully. For GENOCIDE SHRINES are a piercing trishul thrust into the heart of the dogmatic weakling. A burning hatred guides the striking blow at the golden tower looming overhead. There is no time for over-wrought melodies or wheel-reinventing complexity when a cleansing eradication is the modus operandi. Whether it be by spiritual fire or firing squad – the message is clear: Fall in line or suffer at the hands of the reclaimers!

The balance between black Dharmic inversion and a swift rifle-butt to the face has been struck once again. Continuing the established tradition set forth, the loose mania of previous executions has sharpened into a spear-point. Hasty formlessness echoing the peers of old has given away in favour of a militant precision and chaotic, sickening tones. Volley after volley of razor-sharp gun blasts provide rhythmic terror as a well-oiled machine hammers away. Commandments issue forth intolerance from a place of morbidity, calling for the fall of the ultimate enslaver. Truly a DEATH METAL essence has found a foothold in the ideology of the enemies of the Manushya race! Using the cultural weapons of the enemy against him, GENOCIDE SHRINES strikes at the ignorance of the blissfully unaware with a keen perspective of their own DEATH. One step ahead of the herd. All and Nothing!